The Fourth Wave Rolls On

In the last few weeks there is evidence that the Delta variant of Covid 19 is easing. Case rates are turning down in Ireland and in the EU the average is beginning to decline. Deaths seem to be rising but slowly and from a low base. The trends are broadly encouraging especially because there has been a general relaxation of control and more social intermixing during the holiday period now coming to an end and the school year starting,

The first graph shows the situation in Ireland since the start of July and the time Delta began to make an impact. Weekly average of cases (7 day averages) peaked at 18 times the level at the start of July but are now down about 25% since the peak. Hospitalisations grew even more rapidly but again, since the beginning of September are also declining. ICU cases have been about level around the 50-60 mark since mid August. Deaths (also 7 day averages) have been running at about 2-3 per day since August, but the latest figures show a sharp increase to around 6. In the light of the other figures that looks like a blip.

The second graph shows a comparison between Ireland and the EU average in relation to cases and deaths (14 day averages). We are more than twice the EU average now in terms of cases per 100,000 (solid lines) over 14 days (about 450 to 200) but now declining. In terms of deaths rates are almost the other way around and EU rates( deaths per million) are about 90% higher than Ireland. (Source:ECDC) 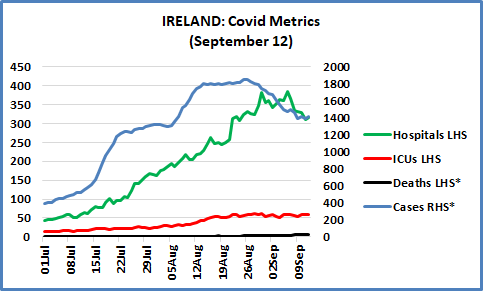 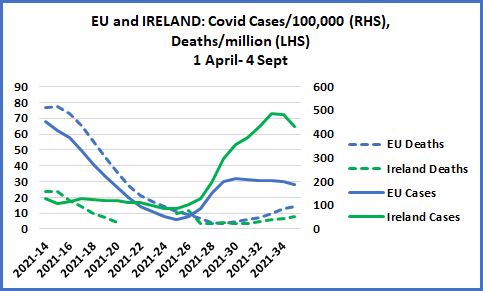 The next graph shows the UK situation. Cases rose by 18 times from the start of June up to about two weeks ago since when they have fallen rapidly but more recently seem to have  resumed their upward trend. Deaths are following with a lag of a couple of weeks. The reason for this pattern is unclear. But it is a worry that a high degree of liberalisation has left the UK with a case rate which is about 40% higher than Ireland’s and a death rate which is 3 times higher. 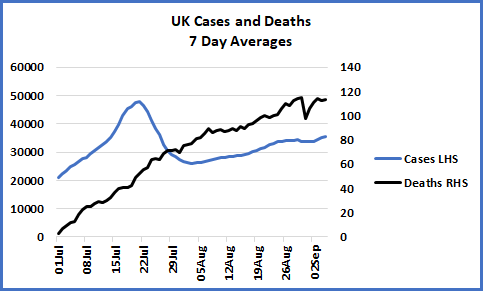 The other two graphs show the situation in the UK and the large EU countries. The dramatic upswing in UK cases is clearly seen where it was followed by Spain and France, but while Spain and France are now declining the UK has resumed going up. The EU 14 day average is now just about 200 per 100,000, a slight decline since the start of July.

But the final graph shows that while deaths rates have edged up they are still very low. The 14 day average is currently about 15 per million. Interestingly, the UK death rate, though about 23 per million is not amongst the highest unlike its case rate. 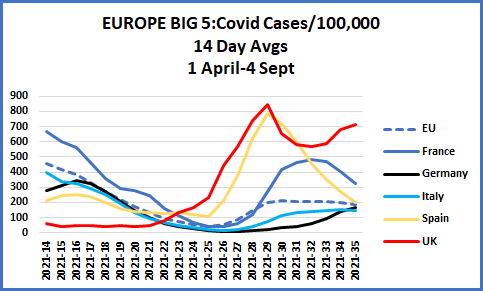 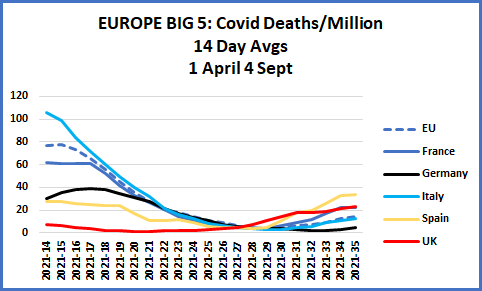 The following graph shows the relative positions of the EU states plus the UK in relation to Covid case and death rates since the start of the epidemic last year. Despite a relatively high case rate in the current phase (i.e. Delta infections), Ireland still has a low position cumulatively. In terms of deaths we are sixth from the bottom and about seventh in terms of cases. 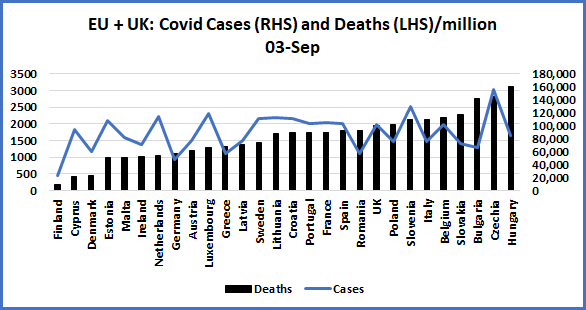 View all posts by: Jim Dorgan